​GET A QUOTE FOR YOUR ORGANIZATION

SURVIVING AN EMERGENCY DEPENDS ON HOW YOU PREPARE BEFOREHAND

We can't know when a disaster will strike, but we can be sure to prepare ahead of time for the best outcome possible.  Knowing exactly what to do in an emergency can mean the difference between life and death.  That's why we, at TASC Response Training, know how important our training is for individuals, schools, businesses, and healthcare facilities.

​THE TIME TO LEARN HOW TO SURVIVE IS BEFORE DISASTER STRIKES

TRAININGS BASED ON REAL LIFE SCENARIOS

TASC Response Training is owned and operated by a former Police Sergeant, Matt Scott.  After more than 20 years of experience, Matt saw how the lack of planning and training affected how individuals and companies responded to a crisis situation.

If you work at a school, office building, church, state or local government agency, this is the training you need to keep yourself and everyone else as safe as possible when faced with a crisis situation. Contact us today: (916)660-2464 or email: tascresponsetraining@gmail.com

As much as we hope you are NOT ever in a dangerous situation, such as with an active shooter, unfortunately active shooters and assailants are becoming more and more common.

​In recent years, according to FBI.gov, there has been a steady increase of active shooter situations which have led to many horrible outcomes.  Between 2000 and 2018, there were 277 incidents in total with 2,430 casualties:

​As you can see, the numbers have been consistently increasing: 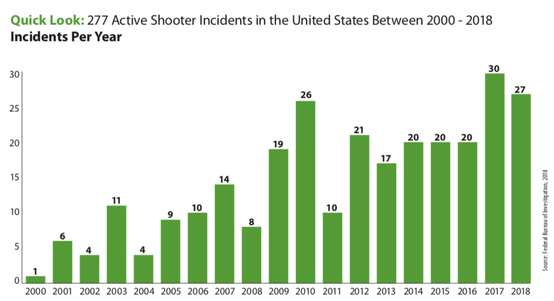 ​Businesses and schools have been the hardest hit:

And unfortunately it's only getting worse....

According to CBSNews.com, there were more mass shootings in the United States than days in the year 2019 - an outrageous 417 in total, to be exact.
​

Now, more than ever, preparation is a matter of life or death.  This training is no longer optional if you want to survive - everyone must be prepared.

A QUICK MESSAGE FROM THE FOUNDER